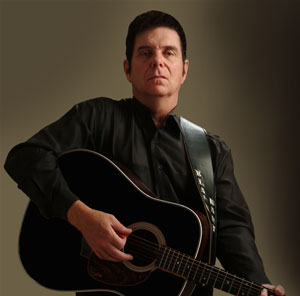 Gary was born and raised on a B.C. ranch, overlooking the Okanagan Valley. Always involved in writing music and performing in local bands, he decided in the 1980’s to create a two-part show – the first part was a “Grand Ole Opry” show where he did impersonations of many of the country music stars of the time, and the second part was a comedy show performed by his alter-ego Black Bart. Most of the musical material for the comedy show was written by Gary, and included political and socially relevant satire – some of which found its way onto Canadian radio. Occasionally, a glimpse of these other facets of his career still appear in his current Johnny Cash Tribute show. Also a serious country music songwriter, Gary has penned six songs that have been signed by Nashville publishing houses. He is still an active songwriter and recording artist , and is currently working on his sixth CD.

Over the years, his touring has taken him from Vancouver Island to Newfoundland and from the Yukon and North West Territories to the United States. Internationally, he has toured in the USA, Australia, and New Zealand. During that time, he has performed with such acts as Alibi, The Jordanaires, Randy Elvis Friske, Stuart MacCloud, Derek Siteman, Kenny Holiday, and Samira, to mention a few.

Gary identified with Johnny Cash when he first heard him. One of the few bass-baritone voices in country music, Johnny was at once recognizable and different from most other country artists. This was good for me says Gary, as my natural voice was baritone as well. Singing Johnny’s songs was easier for me. Also, his songs were earthier than most others. While the vast majority of songs had love as the theme, Johnny’s songs were often about work, prison, hardships, real life, and history – in short – story songs. I found that aspect to be very refreshing. For me, the lyrics were always the most important part of a song. For these reasons, it was quite natural for me to perform his songs. Also, Johnny was always supportive of the underdog and rebelled against authority. This too rang a bell with me, as I have always been concerned about individual freedom, and have been known to irritate the establishment from time to time.