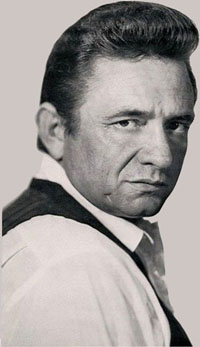 Johnny Cash was born in Kingsland, Arkansas on February 26, 1932. When the Great Depression destroyed the fragile agricultural economy of the region, Johnny’s parents, Ray and Carrie Cash, could barely earn enough to feed their seven children.

In 1935, the New Deal administration of President Franklin D. Roosevelt encouraged marginal farmers from the hill country to resettle in the more fertile soil of Dyess. The Cash family took the government up on this offer and made the move. Working together, they cleared 20 acres of land to grow cotton. Johnny worked side by side with his parents on the farm.

When Johnny Cash graduated from high school in 1950, the Korean War was raging, and he enlisted in the United States Air Force. He was serving with the Air Force in Germany when he bought his very first guitar. With a few of his buddies, he started a band called the Landsberg Barbarians to play in small night clubs and honky tonks around the air base. When his hitch in the service was over, Johnny Cash moved to Memphis, where he sold appliances door-to-door while trying to break into the music business.

In 1954, he was signed to the Sun Records label owned by Sam Phillips, who had also discovered rock ‘n rollers Elvis Presley and Jerry Lee Lewis. Philips was impressed with the song “Hey Porter” Cash had written when he was returning home from the Air Force. When Phillips wanted a stronger song for the A-side of “Hey Porter,” Cash wrote “Cry, Cry, Cry” over-night. The single sold over 100,000 copies in the southern states alone. Johnny Cash, with two friends, Luther Perkins and Marshall Grant (the Tennessee Two), began touring with Elvis Presley and the other Sun Records artists.

In 1956, “I Walk the Line,” was a top country hit for 44 weeks and sold over a million copies. Johnny began to appear at the Grand Ole Opry in Nashville, the mecca of country music. His popularity increased so rapidly that by 1957, country music publications were rating him the top artist in the field. Concert tours took Johnny to Europe, Asia and Australia. He even began to appear as an actor in television westerns. Even as his concert fees escalated, he took time from his schedule to perform free of charge at prisons throughout the nation. As the 1960s wore on, incessant touring took its toll on the singer. To keep up with his hectic schedule, he had become dependent on tranquilizers and the amphetamine Dexedrine. He gave up his home in California and relocated to Hendersonville, Tennessee, near Nashville. When his health recovered and he had freed himself from his chemical dependency, he married June Carter of the legendary Carter Family, whose radio broadcasts had inspired Johnny when he was growing up in Arkansas. With June at his side, he made a triumphant comeback, selling out Carnegie Hall and breaking the Beatles’ attendance record at London Palladium.

In 1969, public television broadcast the documentary film Cash! and the networks became interested in a more regular TV presence. The Johnny Cash show premiered on ABC television in the summer of 1967 and became part of ABC’s regular schedule the following January. This prime time television variety show ran until 1970 and presented guest artists as varied as Ray Charles, Neil Young, Stevie Wonder and The Who. In 1986, Cash returned to Sun Studios in Memphis to team up with Roy Orbison, Jerry Lee Lewis, and Carl Perkins to create the album Class of ‘55. In 1987, Johnny Cash received three multi-platinum records for previous sales of over two million copies each of Folsom Prison, San Quentin, and his collection of Greatest Hits. After a number of lean years, his recording career revived in 1994 with the release of American Recordings, the first of four Grammy award-winning collections of extremely diverse material, ranging from folk songs to his own compositions and songs by contemporary artists such as U2 and Nine Inch Nails. Over the course of his career, he received 11 Grammy awards. He was inducted into the Country music Hall of Fame, the Rock and Roll Hall of Fame, and the songwriters’ Hall of Fame. He received the Kennedy Center Honors, and the National Medal of the Arts.

His wife of 35 years, June Carter Cash, died from complications following heart surgery in May, 2003. Johnny Cash followed her in death four months later, succumbing to respiratory failure after a long struggle with diabetes. Even in death, Johnny Cash remains a powerful force in American culture. only two years after his passing, a motion picture based on his life, Walk The Line, enjoyed worldwide critical and popular success. The film generated a revival of interest in his life and work, assuring that another generation would find inspiration in the timeless sound of the Man in Black.